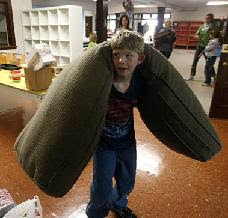 Like most boys, Joe Villeneuve's son, Dylan, is not one for sitting still.

"He's a bouncy, outgoing, happy kid who likes to explore and see how things work," said the Berkeley father. "He's always on the move. He is a boy."

And as every parent and teacher will attest, "always on the move" and a quiet, orderly classroom are not always compatible states.

But Dylan will soon be at a school where "always on the move" is not only prized, it's built into the curriculum. The East Bay School for Boys, opening Aug. 31 in Berkeley, is tailored specifically to boys' energy levels, brain development and love of taking things apart, scattering them across the floor and putting them together again.

The first week of school, for example, the boys will get hammers, power saws and wood, and build their own desks.

"We're going to allow them to make mistakes, experiment, be a little disorganized," said headmaster Jason Baeten. "It's going to be messy, but we think they'll fall in love with school."

Boys need to fall back in love with school, according to several recent studies.

In the past 30 years or so, boys have started trailing girls in reading, writing, grades, test scores and overall motivation, according to a report compiled by educators, sociologists and others who want the president to establish a White House Council on Boys to Men. In 1966, men earned 61 percent of the college diplomas in the United States, but are expected to earn only 39 percent by 2019, their report stated.

End to sitting all day

In many cases, boys are performing the same as they always have but girls have surged ahead academically, due in part to a general shift in curriculum favoring girls. It wasn't hard: More than 90 percent of elementary and middle school teachers are women.

Another factor is higher academic expectations placed on younger children due to pressure to raise test scores, teachers said. Kindergarteners are now expected to read, a task that's difficult for some boys because their language skills generally develop later than girls'. The result is that by first grade, many boys are already lagging and their self-confidence starts to drag.

"The structure of a classroom - sitting still in a desk all day - works better for girls than boys," said Marcia Bedford, an East Bay School for Boys board member and assistant head of school at Julia Morgan School for Girls in Oakland. "There's a lot of pressure on boys to hold it together all day and behave, well, like girls."

East Bay School for Boys isn't the only new school to take on boys' education. Public, private and charter schools for boys are blossoming throughout much of the United States, according to the International Boys School Coalition.

"These schools take boys as they are. Instead of punishing boys for their activity, they embrace it and build the curriculum around it," said executive director Brad Adams. "These schools have had great success."

The Pacific Boychoir Academy in Oakland, an all-boys school that opened seven years ago, tailored its curriculum to boys. History classes focus on conflicts and action, teachers might cover four lessons instead of two in a 50-minute period in order to keep students interested, and boys get plenty of opportunities to run around.

"Boys are naturally competitive and we don't want to tamp that down," said school administrator Jim Gaines. "We want to give boys a chance to be extraordinary."

The hope for all these schools is to create a generation of males who are self-confident, capable and compassionate in a world where men's roles are in flux, Baeten and others said.

Joe Villeneuve is just hoping his son's natural enthusiasm isn't squelched by having to sit still at a desk all day.

"What a luxury for a school to say, we're going to use all that energy," he said. "We're not going to thwart it."