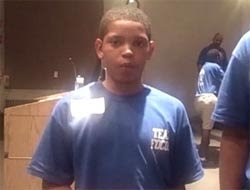 For Boys Who Lack a Father's Guidance, Camp Offers an Opportunity to Learn and Grow

Five years ago, a brain aneurysm took the life of Cottrell and Cordell Wise's father. Their mother, Kelly Wise, tried to fill the void, but Cottrell's grades fell and Cordell became increasingly attached to his mom.

A year later, Kelly Wise discovered Team Focus, a year-round program and four-day summer camp that changed her boys' lives. A national program that began in 2000 with one camp in Alabama, Team Focus connects more than 1,500 young men who lack father figures to male role models.

"Team Focus has done everything for me," Cottrell said during the Team Focus DC Camp, which kicked off Sunday. He has learned how to knot a tie, how to talk to girls and how to study, he said. "It taught me everything my father couldn't do, and it helped me be a better big brother."
This summer, camps held in 14 cities meshed sports with leadership training and connected young boys with volunteers who keep in touch throughout the year. The program is designed to allow the boys to develop relationships with several men in the hopes of creating a network of role models.

The D.C. camp, which began in 2005, will run through Wednesday. The District chapter serves more than 100 young men year-round.

"This is an investment on the future of this country," said Keith Howard, director of Team Focus DC. "If I can be that substitute dad, and walk with a young man and give him the authority and the affection that a young man craves, then I am making an investment."

The program was founded by ESPN college football analyst and University of Pittsburgh coach Mike Gottfried. He launched the camps with proceeds from the 2000 GMAC Bowl, a college football game held in Mobile, Ala. Gottfried, whose father died when he was 11, wanted to create a program that combined Christian values and sports for boys growing up like he did.

Team Focus and the individual camps are funded by several sources, including personal donations, government grants and corporate sponsorships.

At the District camp, boys spend half their day playing games such as basketball and softball. The other half of the day, speakers cover topics ranging from the emotional consequences of not having a father to lessons on manners, note-taking and personal grooming. A chaplain is also on site to lead Bible study and prayer.

At times, the camp feels like a boot camp. Highly energized staff members spelled out the rules Sunday to the more than 50 campers: Shirts must be tucked in. Heads should always be up and turned toward lecturers. Taking notes is a must. No oversleeping or staying up too late. And no cellphones or other electronic devices to connect with the world outside Team Focus. If a camper breaks the rules, he is asked to leave and is seldom readmitted the next year.

After her husband, Reginald, died, Kelly Wise, who lives in Charles County, said she was confused about how to nurture her boys. "Their father was instrumental in their lives. When he died, I didn't know what to do," she said.

For her, the camp has meant a chance for her boys to learn things she cannot teach them. This year marks 14-year-old Cottrell's fourth year with the camp and 12-year-old Cordell's second year. Howard, who has taken Wise's sons under his wing, calls several times a year to check on the boys.

Wise said the change in her sons is clear. Once a struggling student, Cottrell has landed on the honor roll. Cordell, who at first refused to be away from his mother, now looks forward to sharing time with others.

Adam Mason, 19, a camp volunteer and mentor, came to Team Focus DC as a 13-year-old looking for guidance. "I came out a lot better person then I came in," he said. "This is like a crash course on life." After his first year, he stopped defying his mother's rules and began reading his Bible frequently. Eventually, he made the decision to attend Liberty University, a private Christian school where he will begin his sophomore year in the fall. He credits his decision to attend the university and the success he has achieved as a student to his relationship with Howard.

Beyond the camps, staff members and volunteers take the thousands of Team Focus members across the country to sporting events, give them advice and make themselves available in much the same way a father would.

Kelly Wise hopes her sons will one day give back to the program that has given them so much.
"My vision is that as they get older, they will work in the camp and help other boys that are in their situation," she said.