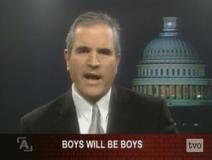 Education proponent and well-known author Leonard Sax is worried, and, according to Sax, parents should be, too.

Sax described a growing gender gap in academic achievement that is seeing young men left in the dust by their increasingly anxious female counterparts to a crowd of about 70, most of them parents, at Delran High School on Thursday.

He linked legions of failing boys and anxiety-ridden girls to the popularity of video games and Web-based media, changes in American society and the abdication of authority by parents during his nearly three-hour talk, which was organized by the Delran Middle School and High School Parent Teacher Association, whose president, Patti Blosfelds, introduced Sax and recommended his books.

Citing his own experiences as a family doctor as well as scholarly studies, Sax said increasing numbers of boys and young men are obsessed with video games and "the virtual world," and as a result are doing drastically worse in academics than students 40 years ago.

Sax, the Pennsylvania-based executive director of the National Association for Single Sex Public Education, has studied the issues extensively and written two books: "Why Gender Matters" and "Boys Adrift: The Five Factors Driving the Growing Epidemic of Unmotivated Boys and Underachieving Young Men."
Today, he said, boys excelling academically in U.S. schools tend to be of East or South Asian descent, children of recent immigrants, or immigrants themselves.
"They see nothing un-masculine in preparing for the spelling bee," Sax said, unlike their white, black or Latino peers, who care more about excellence on the sports field or in the video game world. "For them, caring about school is seen as un-masculine."

The countries that many of these excelling students hail from, such as India and China, happen to have economies that are growing by leaps and bounds when compared with the United States and Europe.

"And it's not because girls are reading more," said Sax, recalling a young man in Maryland who told him he'd rather "be burned at the stake" than read books during his summer vacation. "Boys have stopped reading altogether."

Eliciting chuckles from the audience, Sax recalled how more than four decades ago "ancient" musical artists such as the Beach Boys and Sam Cooke were singing about being "true to your school" and "trying to be an A student."

But these positive messages have been replaced by the likes of 50 Cent, Eminem and Akon, a Georgia native and popular artist who propagated false stories of incarceration to enhance his image. Boys' role models have gone from "scholars to thugs and bullies," Sax said, just as their activities have shifted from playing outdoors and listening to positive music to playing violent video games in a virtual world away from positive male influences.

Video games especially have taken a greater place in the lives of young boys, who love to collaborate in combat, ambush enemies and feel heroic, Sax told the crowd.

While moderate use of nonviolent video games - under six hours a week - has no effect on academic achievement, use in excess of six hours has a direct and linear negative impact. Sax called the trend "displacement," as in the shifting of time normally spent studying, playing with real friends or, perhaps most important, sleeping.

"Teenagers need nine hours of sleep per night," Sax said, and when they don't get it, the deprivation drops their IQ to levels that can make them sluggish and appear "mildly retarded."

Such behavior leads to incorrect diagnoses of attention deficit disorder or associated ailments, opening the way for the prescription of Ritalin, Adderall and other psychotropic stimulants that may mask underlying sleep disorders or other problems, according to Sax.

The impact of video games also is seen on the high school sports fields, where out-of-shape students show up and fail miserably because they think excellence in sports video games equates to achievement on the field, he said. Violent video games result in more insidious problems, according to Sax, who said realistic violence is related to personality changes that make young men "less caring, more hostile, rude."

One place where the combined effects of gender difference are glaringly obvious is at the nation's colleges, Sax said, especially at schools with admissions programs that don't make an effort to maintain a 50-50 split between boys and girls.

Sax said the University of North Carolina admissions program's reliance on grades and test scores, rather than gender, recently resulted in a class that is 62 percent female. Accounting for dropouts, the split will grow to 66-33 percent by the end of the class' time on campus. Nationally, the effect is decreasing the numbers of educated and economically productive males in the long term and, in the short term, creating a troublesome "supply and demand" problem for women, who outnumber their male peers nearly 2 to 1.

"It changes social life at the university," Sax said, and has an adverse effect on women applying to institutions that are forced to reject academically superior women as they try to maintain an even split.
At the nation's top schools - such as Harvard, Princeton and Yale - classes would be as high as 70 percent female, Sax said, without efforts to admit an equal numbers of boys.
Sax reminded the audience that the brain of a teenager is developing and is not mature until age 22 in girls and sometimes not until 30 for boys. Sometimes this means boys fresh out of high school aren't ready for college and should not be forced to attend, said Sax.
Moving to recommendations for the Delran crowd, Sax said it's important for parents to remember their authority and assert priorities. Family dinner should be the No. 1 priority, with schoolwork and real friends coming in at second and third.

Last on the priority list are video games, with no more than 40 minutes of playing time on weekdays and an hour on weekends. Game systems should not be in boys' bedrooms, Sax said, and cell phone chargers should remain in the parents' bedroom so that kids, especially young girls, are not experiencing sleepless nights of text messaging.

Paradoxically, the lazy boys Sax has seen tend to be happy and content, despite academic shortcomings, while young, academically successful girls tend to be anxious.

Sax said young ladies are abusing alcohol and cutting themselves with sharp objects in growing numbers. They are spending more hours fretting about their body image, maintaining a presence on social media sites such as Facebook, and sending literally thousands of text messages per month.

Citing a San Diego State University study, Sax said young girls are increasingly high-strung and anxious. Today, 39 percent of ninth-graders have one alcoholic drink per month, half drink regularly and more than one in four are binge drinking. Noting a picture of 1950s beauty Marilyn Monroe, Sax said that by today's standards she would be fat, especially when compared with skinny sex icons such as Megan Fox of the "Transformers" series of films.

Such unrealistic body images are the norm as eating disorders and cutting are on the rise, with as many as one in five girls committing self-mutilation.

These trends are the subject of Sax's next book, "Girls on the Edge," set for a spring release.