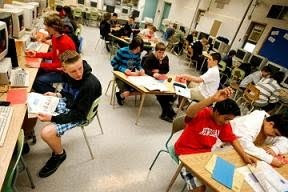 ‘Boys will be boys.”

It's a classic refrain sputtered by exasperated teachers.

But the phrase has taken on new meaning as a growing number of educators say, “Let them.”

The boys leadership academy would be optional and start at kindergarten to Grade 3, adding grades each successive year.

It's the latest attempt in the public system to create separate learning environments where boys don't have to sit still and raise their hands, where they're encouraged to be competitive, and where they're free from the presence of girls who are increasingly outperforming them in class.

As statistics continue to show that boys suffer in the school system while girls thrive, experts say separating genders into different schools could be the way of the future.

“It'll be transformational for the kids who reach that school,” says Brad Adams, the Toronto-based executive director of the International Boy's School Coalition.

Public elementary boys' schools have been long established in the rest of the world, he says, citing examples in Australia, New Zealand, South Africa and Britain. Many successful public boys' schools have cropped up in the United States in recent years.

“[The all girls environment] gives them the opportunity to mature, to become leaders, to discover who they really are without the distractions of boys,” says Holy Angels principal Theresa MacKenzie.

All-boys' schools offer the same safe place to build character and concentration, Mr. Adams says. “A boys' school is an achievement culture, and keeps it clearly in focus in a way that sometimes a co-ed school doesn't do as well.”

But some question the validity of the boy-girl split. Annie Kidder, the executive director of People for Education, a parent-led advocacy group, has seen co-ed classes where students run around in the morning, rain or shine, before settling down for lessons. The active learning approach benefits both boys and girls, she says. “Maybe we should be taking some lessons from boys – that they know some secrets here, that this is a good thing.”

Schools may also be more comfortable splitting genders by classroom rather than segregating the schoolyards. Of the 545 known American schools that offer single-sex education, only 91 count as single-sex schools.

Doug Trimble, principal of Cecil B. Stirling School in Hamilton, Ont., which, for seven years, has run single-sex classes in grades 6 through 8, says having boys and girls eat lunch together is just as important as having them learn in classrooms apart.

But proponents of single-sex schools point to the success of private schools as educational models. The main challenge, they suggest, is changing attitudes to how public education should be offered. “The kind of established viewpoint has been that co-education is normal and normative and single-gender education isn't,” he says. “It's been highly ideologically charged.”

Some single-sex schools have faltered because they reinforce gender stereotypes, says Leonard Sax, a physician and director of the U.S.-based National Association for Single Sex Public Education. Some switch to all-boys schools without proper training, with disastrous results.

“If you simply put all the boys in one room and one building and you put in teachers who have no preparation as to how to lead a boy's classroom, the boys will start throwing things and the teachers will be dismayed,” he says.

Like Africentric schools, aboriginal schools and even French immersion, boys-only schooling will take hold because it's acknowledging different educational needs, says Larry Swartz, who teaches at the Ontario Institute for Studies in Education at the University of Toronto.

“I don't think it's going to be fast,” he says. “I think they're going to pay attention to a) the community, b) the needs, but always looking to some research that will guide them.”

Single-sex education is built on the idea that boys and girls learn differently. While the concept has its contenders, research has shown boys tend to be more active learners than girls.

“Boys need to move, girls have the ability to sit still and work,” says principal Doug Trimble of Cecil B. Stirling school in Hamilton.

Boys thrive on team competition and relish a battle against a buddy, while girls would rather be on the same team, says Leonard Sax, director of the National Association for Single Sex Public Education (he recalls a Scottish high school that had boys write competing newspaper fronts reporting the death of Romeo and Juliet).

Girls tend to look at their teacher as a friend or ally, while boys don't. Girls also tend to appreciate context, while boys are bored by it, Dr. Sax says

While girls can wait a day or two for feedback, boys tend to need it right away, Mr. Trimble says.

“When it comes to completing the task, girls like to see beginning, middle and the end,” Mr. Trimble says. “Boys just want to get started.” 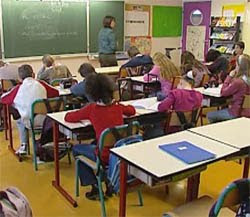 The increase in the number of women in colleges and universities has been a great success story, not just in Canada but in most industrialized countries.
More than half of undergraduates in 2006 were women, according to the Association of Universities and Colleges of Canada. Women have come a long way from the early 1970s, when more than two-thirds of the students were men.

But it also reflects a disturbing performance gap on the path to post-secondary education. Boys are being left in the dust.

As The Vancouver Sun's education reporter Janet Steffenhagen reported in June, girls have come to dominate the stage when academic awards are handed out in high school. And a study published earlier this month argues that lower grades boys are earning in high school are keeping them out of university.

In British Columbia, the Foundation Skills Assessment -- the annual test of basic skills that the B.C. Teacher's Federation rails against -- shows a significant gender gap in reading and writing in all three grades tested, Grade 4, Grade 7 and Grade 10, but less of a difference in math.

Torben Drewes, an economist at Trent University looked at the performance gap between boys and girls as part of a larger project examining the effectiveness of student aid.

Other studies had shown that boys don't work as hard as girls in school. Drewes created a mathematical model to test whether that lack of effort was, as one might expect, responsible for the lower grades.

According to the model, even if boys were to spend as much time on homework as girls, they would still underachieve. The extra effort would close only half the gap.
Drewes argues that boys may need to be treated as a disadvantaged group when their marks are being considered by post-secondary institutions.

But a better approach is to take the problem seriously earlier on and work to close the gap. As Steffenhagen reports, some school districts in B.C. are looking at the issue, but many are not.

That said, the problem is not simple. There are still more perceived opportunities for boys than for girls to earn good wages by going into trades instead of going to college or university .

School officials -- at the urging of the province -- have pushed the trades option, which while open to girls is still more of a male domain. This lucrative opportunity may have given some boys an excuse not to try as hard in high school.
But that doesn't begin to explain the gap that starts in elementary school. We need to find out more about differences in the way boys and girls learn to see if reading and writing should be taught in different ways for boys.

We also need to look at the cultural influences that may be subtly persuading boys that math and science are worth the effort while acquiring language skills is not.
But we should also keep in mind that while girls are earning greater rewards in school in the form of higher grades, the gender gap in the labour market still favours men.

Are these factors related? The main thing we have learned is that this whole area of under-performance of boys in academics deserves a lot more attention. 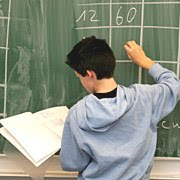 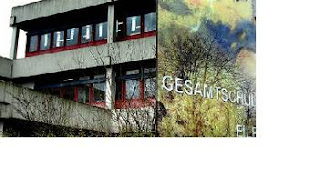 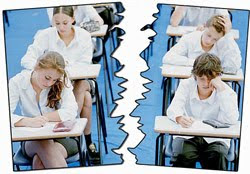