Putting the “Boy Crisis” in Context 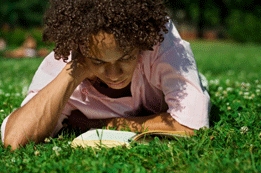 
“The Boys Have Fallen Behind.” “Girls Lead the Nation in Reading Scores.” “Are Teachers Failing Our Sons?” Earlier this year, newspapers across the country ran these and other headlines in response to a March report by the independent Center on Education Policy (CEP) in Washington, D.C. The report, which outlined results on state accountability tests, raised alarm by noting that the percentage of boys scoring “proficient” or higher in reading was below that of girls at all grade levels tested and in every state for which sufficient data were available.

Results for the 2009 National Assessment of Educational Progress (NAEP), also released in March, showed similar patterns ( see figures 1 and 2). Boys in all 50 states and the District of Columbia, at both grades 4 and 8, reached each of the three NAEP reading achievement levels (basic, proficient, and advanced) at lower rates than girls with only two exceptions—and in those cases, boys and girls were essentially tied.

Girls have been posting higher reading scores than boys for decades, but other trends suggest they may also have surpassed boys in overall academic performance. On standardized mathematics tests, results vary: Girls are not decisively ahead of boys, but they’re not significantly behind either. Girls have higher high school grade-point averages, are more widely represented as school valedictorians, and attend and graduate from college in greater numbers than boys. All this has educators, researchers, and journalists debating: Are the boys in U.S. schools in crisis, and, if so, what should educators be doing differently to help them succeed?

Concerns that boys are at serious academic risk have been in the national spotlight before. In a Washington Post op-ed piece published in April 2006, Caryl Rivers of Boston University and Rosalind Chait Barnett of Brandeis University noted that worries about a “boy crisis” go back at least as far as the early 1900s, when they say writers of monthly magazines and books warned “that young men were spending too much time in school with female teachers and that the constant interaction with women was robbing them of their manhood.”

The most recent concerns about boys focus largely on literacy skills. Journalist Richard Whitmire, author of the 2010 book Why Boys Fail: Saving Our Sons from an Educational System That’s Leaving Them Behind, argues that many boys’ literacy deficits put them at a disadvantage not just in English language arts but across the curriculum. “Many state math assessments contain nothing but word problems, as do the SAT and ACT college admissions tests,” notes Whitmire. “What has gone unnoticed is that many boys can’t wade through the puzzling words and sentences to get to the actual math calculation.”

Whitmire also devotes a chapter in his book to the “ideological stalemate” that, he says, has dominated the research and reporting on boys’ academic struggles for years. On one side are educators, researchers, and reporters who use data about gender gaps and brain research to argue for single-sex education and widespread changes to school practices and curricula to make them more “boy-friendly”; on the other side are those who say these sorts of changes could disadvantage girls—who all evidence suggests will face discrimination when they enter the workforce. (A recent report by the women’s business group Catalyst, for example, found that among recent MBA graduates, men started at higher positions and earned on average $4,600 per year more than women in their first post-degree jobs.)

Much of the debate centers on whether a widespread “boy crisis” even exists. Barnett, a senior scientist at Brandeis University’s Women’s Studies Research Center and coauthor with Rivers of the book Same Difference: How Gender Myths Are Hurting Our Relationships, argues that all learners, regardless of sex, are more different from one another than they are similar and rejects “categorizing all boys’ reading and all girls’ reading and talking about a boy crisis.”

Yet while arguments on both sides of the debate may have their merits, evidence suggests that reading deficits at the school, district, and even state level may require solutions that emphasize “context” rather than “crisis.”

A Universal Problem?
One reason gender gaps in reading have captured so much attention is that they seem universal. On the most recent (2006) Progress in International Reading Literacy Study, which measured performance on fourth-grade reading tests and other literacy indicators in 40 countries around the world, girls outscored boys in all educational systems from which sufficient data were available.

In the United States, the gaps also seem to hold across differences in race, ethnicity, and family income. A 2006 report on NAEP scores by researchers at the Urban Institute found that girls’ advantage over boys in reading holds for every U.S. racial and ethnic group studied. Moreover, research by Judith Kleinfeld of the University of Alaska found that, even among white twelfth-graders with college-educated parents (a group expected to have relatively high reading scores), three times the percentage of boys as girls scored “below basic” on the NAEP reading test.

Yet the size of the gaps the CEP found on the state-level reading tests varied widely, suggesting that gender gaps in reading may differ dramatically by geographical context. Results on the NAEP, which are based on a national scale, also show that the size of gender gaps in reading differs across state lines—and that boys in some states outscore girls in other states by large margins. (The percentage of eighth-grade boys scoring at the proficient level in Connecticut, for example, is 16 points higher than that of girls in Mississippi.)

Moreover, the state tests showed gaps between different racial and ethnic groups that were much wider than those by gender. The same state-level CEP reports that show gaps ranging from one to 16 percentage points between boys and girls reveal gaps in the 20-, 30-, even 40-point range between white and Asian American students on the one hand and African American, Latino, and Native American students on the other, says Naomi Chudowsky, coauthor of the CEP report: “Just to put this in perspective, a 10-point gap is still pretty significant, but we’re seeing much wider gaps between racial and ethnic groups.”

In addition, disparities in gender may play out differently in wealthy, middle-class, and lower-income communities. Kenneth Hilton studied the relationship between community wealth and boy-girl reading gaps while executive director of research and evaluation for the Rush-Henrietta (N.Y.) Central School District. Hilton, now superintendent of the Sullivan West Central (N.Y.) School District, found that on fourth-grade state reading tests, girls in both wealthy and middle-income or working-class school districts in New York State scored eight to nine percentage points higher in reading than boys. However, when these same cohorts of students reached eighth grade, the gap grew to 17 percentage points in the middle- and working-class districts, but stayed at nine points for the wealthiest districts.

“I think a fair number of affluent boys grow up with dads who are readers,” Hilton notes. This may make it more likely, he theorizes, that an adolescent boy will incorporate reading into his sense of “what it means to be a man.”

Finally, Chudowsky notes that it’s important to remember when looking at test data that all boy and girl readers are ultimately individuals. “These are just averages,” she says. “A lot of boys are better readers than girls. There’s a lot of overlap in the distribution.”

Motivation vs. Ability
Beyond differences in geography or demographic factors that vary from community to community, gender gaps in reading may be attributable to a different mix of factors in different contexts, says Catherine Snow, a professor at the Harvard Graduate School of Education.

Most researchers agree that on average, boys develop the skills associated with reading and writing 12 to 24 months later than girls. Attending to the possible difficulties some boys (and girls) may have with reading early on is crucial, Snow says, to avoid what psychologist Keith Stanovich has called the “Matthew Effect,” in which strong readers move further and further ahead, while early deficits accumulate and lead to greater and greater difficulties later on.

“If [readers] have a just a little developmental advantage, they get that Matthew Effect push,” Snow says. “There is a cumulative disadvantage associated with not reading very well.”

Advocates for more “boy-friendly” education have been arguing for some time that schools should include more reading materials that boys tend to like, such as action-oriented stories and graphic novels, in an effort to motivate boys to read. William Pollack, author of the book Real Boys and clinical professor of psychology at Harvard Medical School, says action-oriented stories were removed from school curricula several decades ago in well-intended initiatives to remove violence from children’s reading. “Most of the books that were written for elementary school-aged children yoked action with violence,” Pollack says. “But in removing violence, we removed action.”

Nontraditional materials such as comic books and sports-themed materials can provide an important “hook” to get boys more involved in reading, Pollack says, and serve as a helpful bridge to more advanced types of reading later on. Snow, whose research focuses on language and literacy development, suggests that helping boys build this bridge is crucial for their learning trajectories, since the ability to read and interact with high-level materials is central to just about every subject children encounter in the upper grades and beyond.

“If there are kids out there who are, for whatever reason, really reluctant readers or low-level readers, then anything that gets them hooked into spending time on reading is a good thing,” Snow says. “But the problem is that whereas those can be great places to start, they don’t get you where you need to be to succeed academically. You’ve got to be able to access serious academic texts.”

Evidence points toward a few more steps educators can take to help all struggling readers:


“The goal for most educators would be for all groups to make gains, but for low-performing groups to make larger gains so that they catch up,” she says. “That’s the ideal situation.”

Michael Sadowski is an assistant professor in the Master of Arts in Teaching Program at Bard College in New York City and Annan-dale-on-Hudson, N.Y.